During the past 29 years, several rock and rap groups have named themselves "The Alcoholics."  But the original group, formed in Los Angeles, California, in 1979, was a punk rock band that gigged incessantly and broke up in 1982.

While the group only issued one 5-song, 7-inch EP, Alcoholics, on its own Overindulged Records label, the record is now a collector's item, priced at $200 or more.  This EP is sought worldwide, and former Alcoholics receive calls from fans, journalists and vinyl junkies who hope to buy it and learn more about the "obscure" band.

Unfortunately, little is now known about the group.  Once a blemish on the early L.A. punk rock scene, The Alcoholics faded into the South Bay streets from which they roamed.

Recorded at Black Flag's Media Art Studio in Hermosa Beach, California, in January 1980, the 1,000 copies of Alcoholics soon went out of print.  Overseen by Spot, the seminal punk producer, the songs from the recording session have never been re-released.

But The Alcoholics saved all of their studio session tapes, many recorded in El Segundo, California, and dating from early 1979.  In addition, many excellent live tapes are still with band members.  None of this material has ever been released.

While now known among punk aficionados as "early South Bay hardcore," The Alcoholics never made the punk rock pantheon.  But the band shared stages and bills with Weirdos, Agent Orange, Social Distortion, Bad Religion, The Crowd, The Gears, early Red Cross, Middle Class, The Adolescents, The Mentors, UXA, The Chiefs, Stains, Top Jimmy and the Rhythm Pigs, The Sheiks of Shake, The Circle Jerks and The Simpletones, to name a few.

They also performed at the Fleetwood in Redondo Beach, California, when Penelope Spheeris shot The Decline of Western Civilization.  The band, however, never made into the film. Spheeris wasn't interested in The Alcoholics.  Still, during a Decline segment at The Church, the legendary Black Flag hang out in Hermosa Beach, viewers see "The Alcoholics" spray painted on the walls.

Robbie Fields, guru of Posh Boy Records, asked them to record for his label in 1980, but the band never made it into his studio.

Today, all four band members are alive and living in the United States.

2009 will mark the 30-year anniversary of the band's founding. 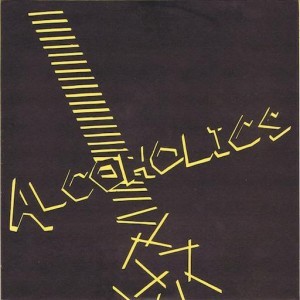